Using Text by the Pixel

Often people are concerned with how many lines of text or the amount of text characters they can place on a LED display. This directly relates to how they will advertise their messages to the public. In this section I will explain the differences between the font sizes as well as basic rules to consider when creating messages.

To start off, we will examine how companies represent their character size and what it means. Often companies will calculate the character size of their displays by the font size of a single line of text.

The most typical design of an LED model is 8 pixels high. Companies who promote a 7 pixel font only use 7 of the 8 pixels, leaving one entire row of pixels blank. Since they do not use the extra line of pixels they count their character size based on 7 pixels, trying to deceive the customer into believing they are getting a tighter resolution. Companies, who use 8 pixel fonts to display their character size, show that they have the ability to adjust fonts to the sign and customers preference.

The limitation on most companies using 7 pixel fonts is their software. Their software is designed to use fonts that only allow for a space to separate top and bottom lines. While it may seem nice that automatically does this for you, and trust me they will advertise the “Automatically” part, in reality what is doing is limiting you. Instead of giving you a feature that will allow you to adjust the spacing between lines yourself they will most often tell you that it’s the Font’s fault. Most often people will want a line of spacing between the top and bottom text, but every once in a while they will want to combine letters by overlapping them to create different effects.

Those software’s that allow for 8 pixel fonts benefit by usually having in their program the ability to stretch and modify the fonts to the sign size. They typically give the user the option to modify the font features themselves or use the automatic settings.

Now let’s move on to Fonts. Having the capability to use different fonts in creating messages is a big advantage. I will always advise people when buying a LED sign to find out if the manufacturer’s software limits them to any number of fonts. With the millions of fonts in existence though, there are 3 basic rules that should be followed in order to create nice legible messages.

First, fonts being used should have one column of pixel spacing between each letter. Second, when dealing with multiple lines, make sure to have at least one row of pixels between each line of text. Third, an absolute minimum of 5 pixels must be used in order to create the legible alphabet correctly. I have created a diagram below that explains these 3 basic rules. Granted users can always disregard any of three rules, but run the risk of intersecting or compressing letters to an illegible view. 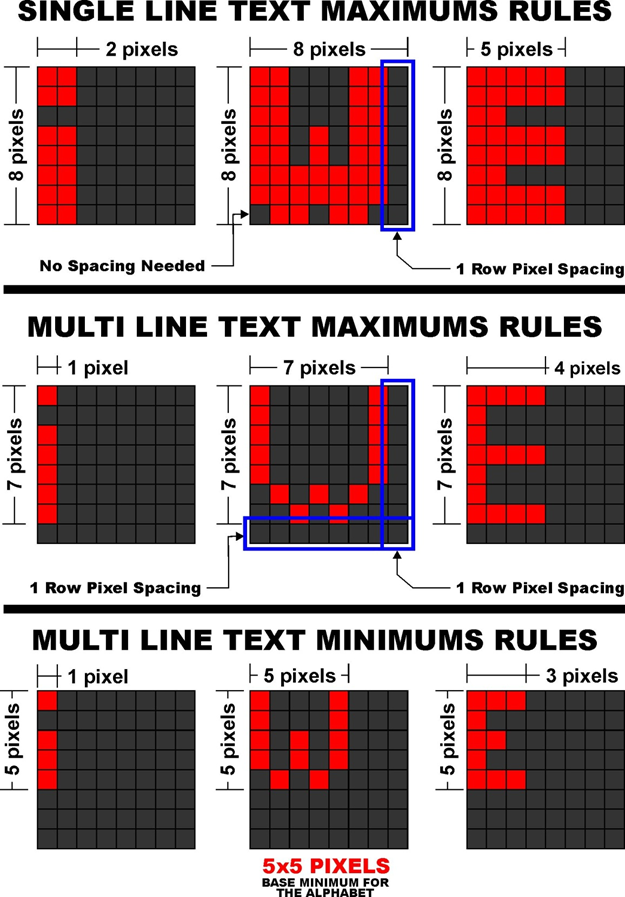 About the Author: Kayla Dearment